THOUGHTS, NEWS, AND READER EXTRAS FROM MICHAEL G BERGEN
How I researched my second novel

My grandfather returned from his six-year tour of duty in South Africa and India in 1906 to a different England to that he had known. When he left Tyneside in 1901, the year of Queen Victoria’s death, the most critical technologies of that era had been the steam engine and the telegraph. Land transportation up to that point had used the age-old means like horses, mules or oxen. But steam-driven locomotives, trams, ships and traction vehicles took over during the Victorian Era. Agriculture, public transport and industry used them extensively. Steam engines drove many sectors. 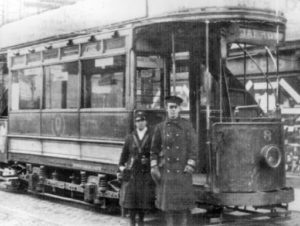 But when Joe returned, electric trams and internal combustion vehicles were replacing the traditional forms of transportation. And the telephone was by then in use besides the telegraph. Telephones would change long-distance communication and allow the British Government to control the far-reaches of the vast British Empire from London via cables deep in the oceans. One could occasionally see the first airships powered by internal combustion engines and aeroplanes flying overhead from time to time. It was a time of radical change. My research and writing had to keep pace with these changes and well as their effect on ordinary people. And as the Edwardian Era progressed, society changed, including in the lives of working-class people, the heroes of my stories. Joe arrived back from India a hero for his family, but heartbroken from the end of his love affair with a British Army nurse in South Africa and India. But he renewed his acquaintance with a family friend, Mary Caston Burgess. She had blossomed from a teen at his departure into a lovely woman. They started a relationship, married in 1911, and started a family. Hawthorn Leslie hired Joe on his return, and he settled into married life. For a few years from 1911 to 1914, he was a lucky man with a growing family. But that was all about to transform with the approach of the Great War. So my research moved to the lead-up, causes and start of that horrible conflict. Now I’m neither a scientist nor a historian. But I am naturally inquisitive, and I like to understand our history and what people went through in the first half of the twentieth century, my family in particular. This is what I have aimed my research at. What was life like for people who had very little and were susceptible to the whims of politicians and industrialists? How did it affect my ancestors and did it have any effect on me? 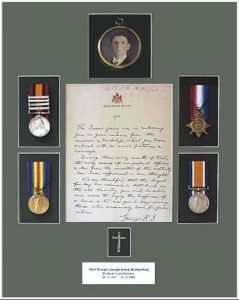 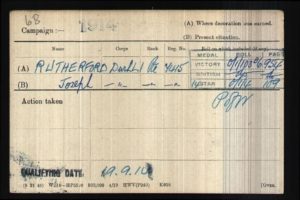 I first turned to family artefacts – my grandfather’s medals and a letter from King George V for hints. For his service in the Great War, they awarded Joseph Rutherford the 1914 Star, the Victory Medal 1914-1918 and the British War Medal 1914-20. That didn’t tell me much, but my research discovered his “medal rolls card”. The most important information on that card was the “qualifying date” of the 19th of September 1914. That was the date that he and his battalion arrived at the trenches. This small document also listed his rank as private, his service number as 7415, and the medals he was entitled to. 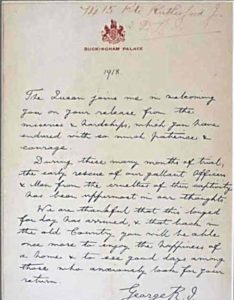 Another artefact was the letter from George V on Joe’s return from Germany. The purpose of that letter was for the King to thank the surviving POWs for their service and sacrifice. All POWs received one. But another crucial little bit of information was scribbled at the top right-hand corner of the letter – 7415 Pte Rutherford, J, 2 DLI. That told me that he was no longer with the 1st Battalion of the Durham Light Infantry, who were still in India. He had enlisted with the 2nd Battalion DLI.

I then turned to S.G.P. Ward’s book, Faithful: The Story of the Durham Light Infantry and another book by John Sheen, The Steel of the DLI: The 2nd Battalion of the Durham Light Infantry at war 1914-1918. I also found and downloaded the War Diary of the 2/DLI. The later was the hand-written log of the battalion from the 5th of August 1914, the day the Great War started, until the end of the war.

With the help of these three books, I was able to track my grandfather’s footsteps from the 5th of August to the 19th of September, when he entered the trenches on the Chemin des Dames above the River Aisne. The War diary recorded in great detail, virtually every day, every detail about their movements and the number of deaths, injuries and missing in action. And I was able to surmise the day he was captured by the Germans, as well as the place where he became a prisoner. 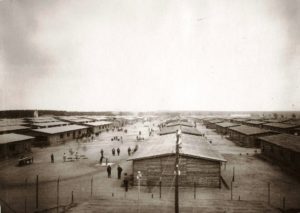 All I was missing was his destination in Germany. And that question was answered by the International Red Cross in Geneva. The Great War was the first conflict where the Red Cross was informed about every prisoner of war on both sides. It received information from all combatants about the name, rank, service number, regiment and company of every prisoner as well as their destination. They also recorded each move a POW made from one camp to another. With that last vital information, I learned that my grandfather was first transferred to a POW Camp near Hamelin, then moved from Hamelin to Cellelager on the 17th of June 1916, then to Soltau on the 3rd of February 1917, where he was interred until he was liberated in November 1918. All three of these encampments are in the North of Germany, in the general vicinity of Hannover. 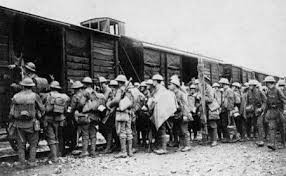 And so, once more armed with all the historical data I needed, and the books and war diary I mentioned to guide me, I began another journey with my grandfather. This time he travelled from Jarrow and Newcastle to various training and mustering camps in England and Scotland, then onto a ship from Southampton to St Nazaire on the West Coast of France. From there they were loaded into the “40 hommes 8 chevaux” cattle cars of a troop train across France. 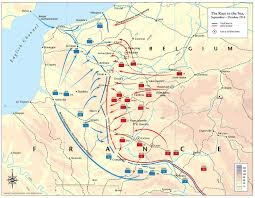 They arrived within marching distance of the Aisne trenches east of Paris and the horrors that awaited them there. After a short stint in the trenches, the battalion was ordered to join the Race to the Sea a successful effort to block the German forces from breaking through to Paris. Joe’s unit was ordered to take a small French town called Ennetières near Lille. There Joe and his friend were isolated from their company and taken prisoner. Armed with all these facts, and guided through the war with the Durham Light Infantry from Colonel Vane’s detailed book, and the 2/DLI War Diary, I could begin my journey with my grandfather through the Great War. What emerged from that journey, and my imagination was my second historical fiction novel: Empire and War. A sampling of other references I used during the writing of this book includes: Richard van Emden, Prisoners of the Kaiser (The Last POWs of the Great War); Heather Jones, Violence against Prisoners of War in the First World War; David Brown, “Remembering a Victory For Human Kindness – WWI’s Puzzling, Poignant Christmas Truce”, The Washington Post, 25 December 2004; Max Hastings. William Collins, Catastrophe 1914: Europe Goes To War; Jo Bath, Great War Britain: Tyneside, Remembering 1914-18; Norman Ferguson, The First World War: A Miscellany; Ronan McGreevy, Rudyard Kipling’s first World War tragedy; Brian Best, Reporting from the Front: War Reporters during the Great War; Jones, Simon, Underground Warfare 1914-1918; Henniker, A. M., Transportation on the Western Front 1914–1918; Richard Holmes, The Western Front; Best, Geoffrey, Churchill: A Study of Greatness; Martin Pegler, British Tommy 1914-1918; Walter Reid, Architect of Victory: Douglas Haig; A. Euster, Dr C. De Marval, Rapports on visits to POW camps in North Africa and Germany, International Red Cross, Geneva/Paris, May 1915; Kramer, in Sibylle Scheipers (ed.), Prisoners in the First World War; Simkins, P.; Jukes, G.; Hickey, M., The First World War: The War to End All Wars; Miles, W., Military Operations France and Belgium 1917: The Battle of Cambrai; Heckscher, August,  Woodrow Wilson; Marix Evans, Martin (2002) 1918: The Year of Victories; Marix Evans, Martin (2002), Over the Top: Great Battles of the First World War; Honigsbaum, Mark, “Spanish flu: the killer that still stalks us, 100 years on”; Lloyd, Trevor Owen, The British Empire 1558–1995; Cecil, Lamar, Wilhelm II: Emperor and Exile, 1900–1941; Macdonogh, Giles, The Last Kaiser: William the Impetuous; Ashton, Nigel J; Hellema, Duco, Hanging the Kaiser: Anglo-Dutch Relations and the Fate of Wilhelm II, 1918–20; George Russell Elder, From Geordie Land to No Mans Land.