THOUGHTS, NEWS, AND READER EXTRAS FROM MICHAEL G BERGEN
How I researched my third novel

The research for my third book began with the so-called “interwar years” from 1919 to 1939. My grandfather returned from four years as a German prisoner of war, a wisp of a man after 1,479 days of hunger and anguish in captivity, weakened and demoralised by the ravages of war and the 1918 influenza pandemic. A relieved and grateful family comprising his wife Mary and his three children greeted him, of whom only his 8-year-old son recognised him. His eldest daughter was a baby on his departure, and his youngest was born while he was on the Western Front. On his homecoming to Jarrow, he was but one of the many soldiers returning to a completely different world. Many of these men had terrible disabilities, blindness or disfigurement. In their absence, their women had gone to work and kept the factories and farms producing badly needed products from food to armaments. After they had gone through the horrors of war, they now had to adjust to a transformed society.

A valuable reference I found for this section of the book was Jo Bath’s Great War Britain: Tyneside, Remembering 1914-18, published by the History Press, 2015. It is a small book but packed with information on life on Tyneside during the Great War and concludes with a chapter dedicated to how Tyneside and its people coped with the transition to life in peacetime once more.

My research first focussed on economic and social conditions in the North East of England over the next two decades. Tyneside had once been one of the great

industrial revolution powerhouses of Britain, rich in coal and heavy industry. Once Joe had regained his strength and composure, he applied for work with his old employer, Hawthorn Leslie, a shipbuilder and locomotive manufacturer. They took him on as a link between management and the workers in the Hebburn shipyard. After an early spurt in the economy and a full order book, the shipyards of Tyneside continued working as usual. But those were deteriorating times for the heavy industries of the north. For them, a struggle to survive began during the postwar 1920s, culminating with the Great Depression of the 1930s. One by one the collieries and shipyards of the North East closed.

As a result, the times became more challenging for the unemployed working men of Tyneside. The Irish Republican Army established itself there and carried out acts of sabotage. Labour unrest became a new norm, often accompanied by violence. Then Jarrow’s largest employer, Palmers Shipbuilding and Iron Company Limited, closed its doors in 1933, and Joe’s employer, Hawthorn Leslie, was struggling and had to reduce its workforce by 20% to 1,000 workers in 1933. The workers hung on as long as they could, waiting for the British Government to help them. But that never happened. So, in 1936, 200 Jarrow workers began a 291-mile, 22-day march to London to protest the unemployment and poverty they were suffering in Jarrow during the 1930s. Inspired by this march, Joe and his family followed his oldest children south to Croydon, where newer industries were thriving and seeking workers.

But throughout this period, Hitler was building the Nazi movement in Germany. And towards the end of the third decade, he started annexing German-speaking regions such as Polish Silesia, Czech Silesia and Austria as part of his “Lebensraum” expansionist policies. Then, on the 1st of September 1939 German forces invaded West Poland, while the Soviets invaded East Poland and when the Allies entered the conflict, World War Two had started.

My references for this period included Ben Johnson, The 1920s in Britain; Gerard Noonan, The I.R.A. in Britain, 1919-1923: ‘In the Heart of Enemy Lines’;  Eric D. Weitz, Weimar Germany: Promise and Tragedy; H. W. Richardson, “The Economic Significance of the Depression in Britain,” in the Journal of Contemporary History (1970); Overy, Richard,  Misjudging Hitler; George Santayana, Reason in Common Sense, volume 1 of The Life of Reason, 1905.

Then the heart of the story begins, and the focus shifts to the Canadians entering the war, George Bergen among them. On the 19th of September 1939, George joined the 7th Battery, 2nd Field Brigade Royal Canadian Artillery as a Gunner Driver Mechanic

So my research shifted as well. I needed to find a source or sources, that would provide me with information on the movements of George’s regiment. And as luck would have it, I found a book that provided just that: G.W.L Nicholson, The Gunners of Canada, The History of the R.C.A., 1919-1967, McClelland & Stewart, 1972. Colonel Gerald William Lingen “Gerry” Nicholson was a British-Canadian soldier, historian, author, and teacher. From 1943 until his retirement in  1961, Nicholson served in the Historical Section,  Canadian Army, where, in 1959 he succeeded Colonel Charles Perry Stacey to become the section’s second director. Nicholson authored numerous histories of Canada’s military. He is best known for his 1962 book Canadian Expeditionary Force, 1914-1919, the only official account of Canada’s participation in World War I. The book I found, picked up the story of the R.C.A. from 1919 through WW2 until 1967.

his voluminous work provided more than I had hoped for. Nicholson chronicled every move, every exercise and every encounter George Bergen’s 2nd Field Brigade covered in such great battles such as the landings in Sicily and mainland Italy in 1943, the “underbelly of Europe” as Churchill had called it.

The regiment first spent three years moving around England and Scotland “in defence of these islands”. When they first arrived, they were severely underequipped with guns and transport vehicles. But this didn’t inhibit them, and their new guns and vehicles caught up with them. Their headquarters moved to Addington, Surrey, less than five miles from Beckenham and Croydon. While there, George was asked to deliver a message to the Rutherford household. There he met Joe Rutherford and his daughters. 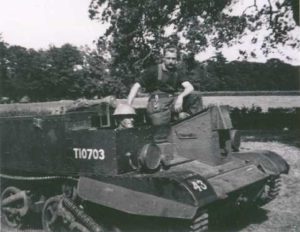 Dolly Rutherford caught his eye, and he eventually asked her ou

t on a date. She would become his wife in the Autumn of 1942. When his first child was to be born in July 1943, he requested a delay in his departure with his regiment when they left for Italy. George missed the landings in Sicily but arrived in time for the invasion of mainland Italy. Thanks to Colonel Nicholson, I was then able to follow the 2nd Field Brigade on its long and arduous march north through Italy. Nicholson described in detail the horrendous battles of Ortona, Monte Cassino, Rimini and many others. It also highlighted periods of calm and R&R for the tired gunners at various stages of the campaign. The book through France to the battlefields of Belgium and the Netherlands in the final days of the war. 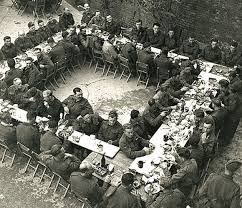 I could reconstruct George’s leaves from his army records, including a week long marital leave to England in April 1945, which resulted in the conception of his second child, a girl they named Julie. Following this leave, the First Canadian Army swept north, liberating more of the Netherlands from nearly five years of German occupation, and providing food and medical aid to the starving population.

Finally, the war ended on the 8th of May 1945, and Dolly and her son left two days later for their future in Montreal, Canada, with George joining them later when the victorious Canadian Army releases him. 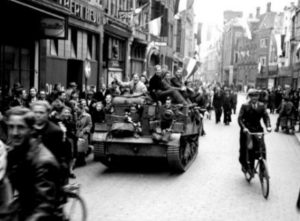